Become Part of the ACC Family and Begin Your Success Story.

One of the Youngest Texans Ever Elected to Public Office 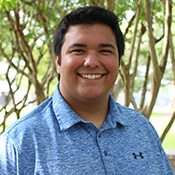 Alvin Community College student Joel Castro got an early start to his political career, winning a runoff election for a position on the Alvin City Council.

Castro, 18, of Alvin, won the At Large Place 2 seat against John Burkey in Saturday’s election. He won the seat vacated by a sitting council member last year and will serve one year before facing re-election.

“I feel honored and blessed for the citizens of Alvin to give me an opportunity to serve them in the council position,” said Castro, who serves as an ACC ambassador. “I look forward to serving them with honor and integrity.”

Castro is currently one of the youngest Texans elected to public office.

“I hope it sends a message to our youth that they can get involved now,” he said. “Don’t let anyone tell you that you’re too young to make a difference in your community.”

The Criminal Justice student was motivated to run for the position after he was encouraged by others. After reflection and prayer, he decided to put his name on the ballot.

“I had people asking me to go for it and encouraging me to pursue the office and my dream,” he said. “They thought I would do well on the council seat. I had an overwhelming amount of support.”

He has several goals he hopes to accomplish while on council.

“I wanted to beautify the city, improve the infrastructure and control the development while being fiscally responsible,” he said. “I want us to focus on small businesses and improve conditions for economic development. I want to be able to listen to the citizens and work for them. This is what they elected me to do.”

He had considered attending Sam Houston State University’s Criminal Justice program. When he entered the council race, Castro adjusted his plans to stay close and attend the University of Houston so he could continue his education while serving the city.

His ultimate goal is to pursue a law degree. Castro plans to serve as a prosecutor before shifting his career to family law.

Castro is grateful for the opportunity and feels blessed to have this chance.

"Alvin Community College offers a vast amount of academic opportunities and provides it at an affordable cost. There is something for every student outside of academics such as theater, Christian organizations, Student Government, Hispanic College Alliance, etc. ACC also provides assistance and information to help when students are in need for instance; scholarships, student worker jobs, catastrophic assistance and even a food pantry. In addition, ACC is involved in the community and that is important to me. #FINSUP!"